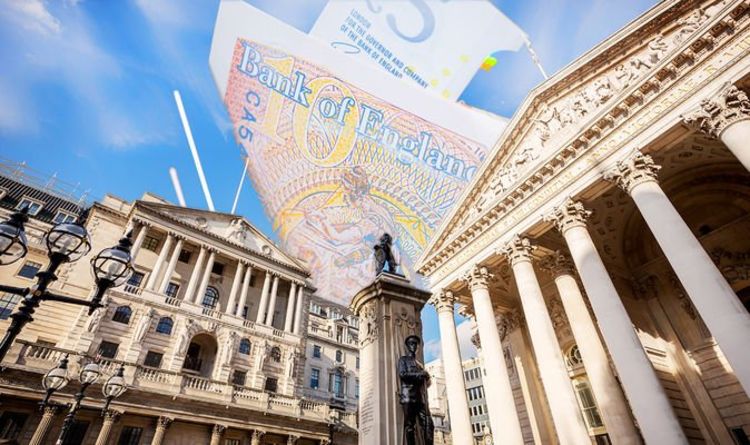 The interest rate was cut to 0.1 percent today after previously being cut by 0.5 percent last week. The BoE said today covid-19 will result in an econmic shock which is “sharp and large”. The bank’s Monetary Policy Committee (MPC) voted unanimously in favour of the rate cut.

The BoE warned financial conditions in the UK and globally have “tightened” in recent days due to weaker market conditions.

In a statement, the central bank said: “Over recent days, and in common with a number of other advanced economy bond markets, conditions in the UK gilt market have deteriorated as investors have sought shorter-dated instruments that are closer substitutes for highly liquid central bank reserves.

“At its special meeting on 19 March, the MPC judged that a further package of measures was warranted to meet its statutory objectives.

“It therefore voted unanimously to increase the Bank of England’s holdings of UK government bonds and sterling non-financial investment-grade corporate bonds by £200 billion to a total of £645 billion, financed by the issuance of central bank reserves, and to reduce Bank Rate by 15 basis points to 0.1%.”

“Although the magnitude of the economic shock from Covid-19 is highly uncertain, activity is likely to weaken materially in the United Kingdom over the coming months.

READ MORE: Coronavirus POLL: NO lockdown for the over 70s – ‘You can’t force us!’

The action comes as one of the first tasks of new Bank of England govenor, Andrew Bailey.

Mr Bailey has been thrown in at the deep end in his first days on the job, and now has to negotiate the new interest rates set by the central bank.

However, fortunately, Mr Bailey has experience in similar matters.

He worked as part of a team central to preventing a banking system meltdown in the global financial crisis twelve years ago, and later played a central role in responding on behalf of the UK to the Greek debt crisis.

The Chancellor, also newly appointed, Rishi Sunak, has said the Government is prepared to take “whatever action is necessary” during the crisis.

He has pledged millions towards helping struggling businesses affected by the pandemic.

The central bank has also announced it will put forward another £200 billion in bond buying under the quantative easing programme.

It will also extend the term funding scheme – encouraging banks to pay forward the benefits of interest rate cuts to people and businesses.

0.1 percent is the lowest base rate in the Bank’s history.